SecurityOnion on a netbook with port mirroring on WRT54g

May 16, 2012
So firstly, this quick blog post is for Scott Runnels as he asked for it, I suppose that's what you get for saying you'll help out on an open source project :) All good!

I'd a spare Dell netbook (8gb disk, 2gb ram & 1.6gb Intel Atom CPU) lying around so I figured I'd see if I could try running Security Onion off it.
As you'll know by now (from posts here and on my HackEire blog) I think the Security Onion is fantastic and unsurprisingly, it runs well on my little netbook as you can see from the screenshot below, which was taken whilst the port mirroring was enabled and there were people browsing the net and watching content via Netflix. Bro seems to be heaviest on the system but with a run queue average (any time I've looked) around 1, I'm not concerned and I don't believe there's anything to worry about (I need to play with 'bro' as I've heard great things about it). 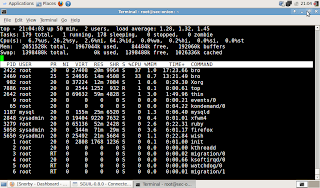 So the more interesting aspect was now that I had my netbook converted to a fully-fledged NSM (Network Security Monitoring) device, how could I get traffic routing through it. Spanning a port on a switch seemed like the easy way but if you've read my HackEire NSM blog post, I don't always go for the easy option. Therefore, I figured I'd have a go at performing port mirroring on a Linksys WRT54g wireless router running Tomato. I had a look around at possible ways (from the basic to the complex) but couldn't see how it could be done, maybe using the 'mangle' switch in iptables to redirect or something.

A bit of Google-Fu later and I found something on the PaulDotCom mailing list, which seemed promising  and I eventually came to here, which confirmed that it was possible with iptables but that I needed small modification. The poster 'SirMeowmix_III' does a fantastic job and takes credit for essentially solving my issue but to quickly summarise what I did -
to ensure things traffic was both flowing and being redirected as expected. 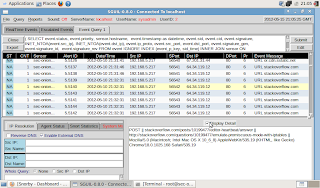 and below in the detailed packet data, we see the ICMP traffic from my client to the default gateway